“And I think that’s why our friendship worked so well too—the expectation was just to be there for each other. “

How would you, individually, define love?

Liv:  To me love can be a range of different things, but if we’re speaking about my love towards my fiancé in particular: I think you know you’ve found the one when you can… humans by nature especially in this day and age, are very lustful, because we always think the grass is greener. We have so many things accessible to us through Tinder, whatever social media platform. I think it’s the ability of being able to assess another human and saying, “Oh yeah they’re attractive, but I would never want to get to know them, because the person I do know, and the person I truly love—I love them for everything that they are.” So there really is no interest in pursuing something else. I think that’s when you know you’ve found the one because you stop looking.

Nick: Honestly, immediately there was the comfortability, the openness: you did whatever you could to talk to that person, to be with that person—obviously I moved—but it’s that feeling you get when it’s so easy. I’m not saying you don’t fight or have disagreements, but it was so easy. We got lucky, we literally just jumped into it without really knowing much, looking back, we really only saw each other four times before I moved up here. That simplicity to it. We instantly clicked, there was no real glaring issues, we never had a dramatic issue that we couldn’t resolve. It’s hard to describe it, but it’s just that feeling where you just instantly know. It’s just easy. And it’s not just that honeymoon phase, it continues. Like even in the fights, you’ll argue, but it’s still easy—you can work through that.

Did being friends beforehand help your relationship?

Liv: Immensely. You’re not trying to impress your friend, you’re just yourself. Whereas I feel like when you enter a relationship and it’s going towards dating, you put your best foot forward first and things start to unravel.

Nick: Yeah we were open early

L: Ya like everything just kind of unravelled and we decided, do we like each other or not? 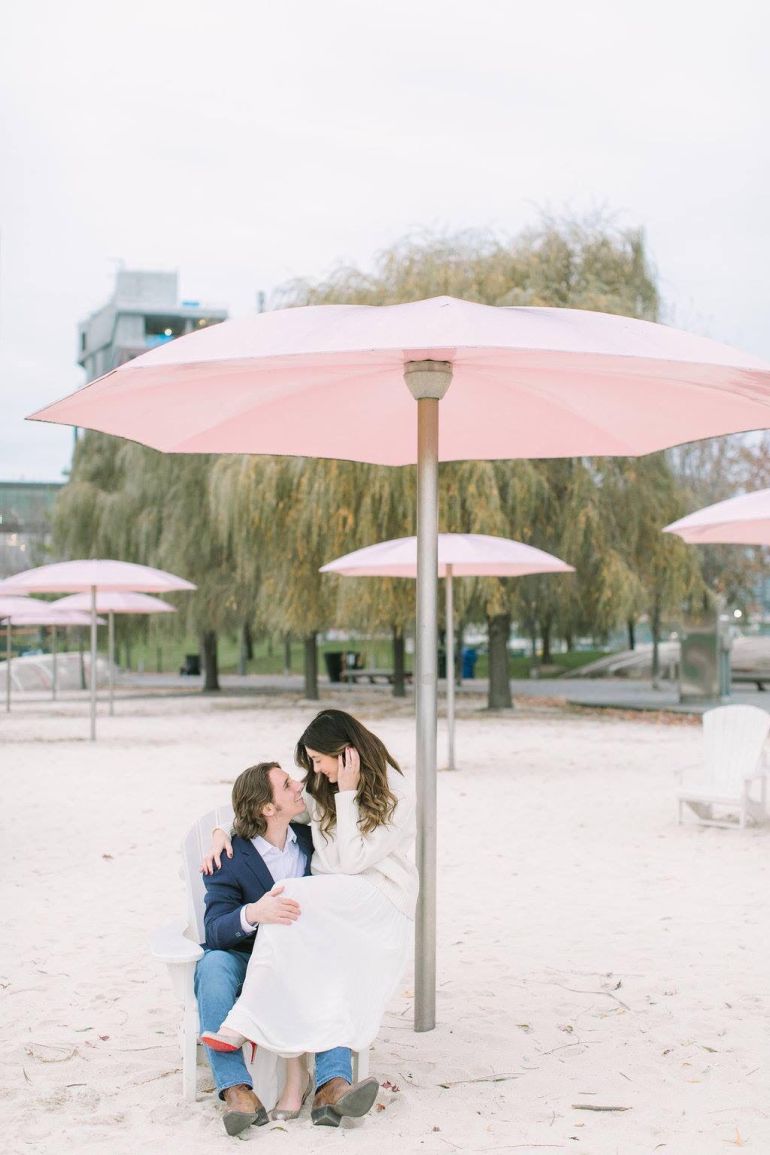 So when was the switch for you guys, that you wanted more than just a friendship?

L: We always had feelings for each other, but because we were so long distance [he lived in Texas I was in Toronto] and we were young—we were 20 when we met—we just couldn’t figure out how it would work. I was dating someone, and right before I graduated university, we broke up. And because Nick was my best friend and I told him everything, I was like, “We broke up” and Nick was like, “I know you don’t want to hear this… like I’m not mad about it.”

L: My dad knew about Nick, because of the family connection, and he knew how I felt about him…

N: And I knew her brother already for five years at this point…

N: I’d say the only rocky point about doing long distance was not being able to date at first.

L: It’s missing the small things. Like being picked up and taken out on a date.

N: Or like New Year’s, those kind of moments.

L: It’s just missing those little things—being able to just hang out whenever you want. But then it helps when you’re with the person because you cherish every moment and it mitigates a lot of the things you take for granted when you do live in the same city as the person you’re dating. You really have to be so communicative and so intentional with your words and how you speak to one another, because that’s all you have.

So when did you know you loved each other? And it could have been at different times in your relationship, but what was that moment?

L: I knew the night I met him that he was the one. I swear I called my best friend, “I met the guy I’m going to marry but he lives in Texas. I don’t know when, I don’t how, I don’t know why, but he’s it.” I mean, I knew right away. [Laughs] It took him a little longer.

Nick: [Laughs] Yes, maybe it did… but the feeling did come. I feel like, for me, it was probably because even when she was dating [another guy], I was technically seeing another girl as well, and in the back my mind—and I’m sorry, I know, this sounds horrible of me and very douchey—but I would always be thinking about Liv.

Liv, you knew that he was the one from the start. So how come you didn’t… Like I know distance was  a factor but if you knew deep down, why didn’t you try to pursue it?

L: I’m a very realistic person and at the time it wasn’t realistic. So for me, I didn’t want to close myself off to opportunities that came my way and I never expected him to do that either for me. And I think that’s why our friendship worked so well too—the expectation was just to be there for each other.

N: Or limitations at that fact. We never got pissed at each other if either went out or did anything. At the same time we couldn’t expect the other to do the same.

L: So I didn’t mind letting myself have feelings for someone else and like pursuing another option because realistically, yeah I did not see when we were… I knew at some point… but I didn’t know when and if. And if it didn’t happen, I had closed myself off to maybe another opportunity that could have been. But obviously this was always going to be the outcome—but you don’t know that when you’re 20.

So in comparison to your other relationships how is this relationship different from those experiences?

L: It’s so different. You know when you meet the one, the difference in trust is huge. I don’t know if you’ve ever been cheated on or been in a relationship where someone’s really hurt you, upset you, or broken your trust. But there was never a moment with Nick where I felt like he was ever going to do something to hurt me. And it’s a sense of peace and barely even knowing him, I just knew I could trust him. And I think that’s really the big difference in this relationship between all of my other relationships. It’s like that nagging feeling, “Is he talking to someone else? Is he thinking about me? Am I enough? Do I feel secure? Is this good?”—I never had that I just always felt calm and good and trustful.

N: I feel like for me it just kind of goes back with my answer of what is love: it’s just easy. Just our perspectives from talking, hanging out… everything, our views, our life goals, everything is already in line. Our family values, family, the background is the same: her Italian upbringing is just like mine. So it’s like that’s probably been the biggest difference for me.

What do you think is the foundation for any relationship?

N: Super cheesy answer, but communication. Like the cheesiest answer you can possibly give but literally.

L: Be open. Even if you think you’re gonna hurt them, say it.

N: Yeah, there’s been multiple times where we’ve been honest and it lead to an argument, but we figured it out. And we may not agree with what she says or I say, but at the end of that day it’s nothing you can’t figure out.

So Nick, how long did you know you wanted to pop the question?

But realistically knowing that I was going to propose, that was before I came up here but it was just a matter of working through the smaller kinks and figuring things out before actually doing it until the appropriate time.

Love is…? Fill in the blank with one word or two.

N: I’m going to stick to my thing: love is easy. Because, like I said, when it’s there, it’s just easy, plain and simple.

N: If you don’t say my name you’re wrong.

L: [Looks at Nick] You know what’s so funny is I was going to say: love is you. Love is you, because I don’t think I’ve ever been in love until you.

*photos provided by Liv, and taken by Elizabeth in Love