adventure, dating, love, love is, love is an adventure, paris, Relationships, what is love

“I think that’s really where relationships are made: it’s the stuff in between the highlights that really makes it what it is.”

Elizabeth: Love to me, in this relationship, is this rock hard partnership. We have a partnership that’s so different from love that I have in other aspects of my life. Our love is this unconditional, mutual respect and support that I think that has been prevalent since the start and is going to continue. Love is knowing when one of us needs more support than the other and taking care of them and uplifting and empowering them and making them feel loved, wanted, and needed. It’s seeing each other as equals and making sure that the other person is feeling as much love and affection as you are.

Conner: It’s being able to give the other one the super soft pillow in the bed when they need it. It’s the support, and being able to talk about anything with each other, but also realizing that it’s not all encompassing. We don’t need to do absolutely everything together and we’re okay with that. She’s okay with me sitting in the house playing video games and just being there with me, while she’s doing her own thing. It’s being okay and being happy just being there with each other.

When did you know you loved each other?

C: We both moved to Calgary for our summer internships [during our Masters’ program]. We were looking for a place and found this apartment and we asked if we could sign the lease on the spot, and move in right that second. So we managed to find a place, find a mattress on Kijiji, and live in this apartment with nothing but a king size mattress for three months. After we survived that, that was it—that’s when I felt it.

E: It was before he left for Calgary and before we knew I was going too. It was really awkward, because we were still really early in the relationship. At that point, there was no “I love you,” there was no “this is going to be long term.” But I think I loved him from really early on and it just grew, but when I knew there was jeopardy there and a situation where it could’ve fallen apart, when I knew that it might not work, it was like, “This could kill me.” 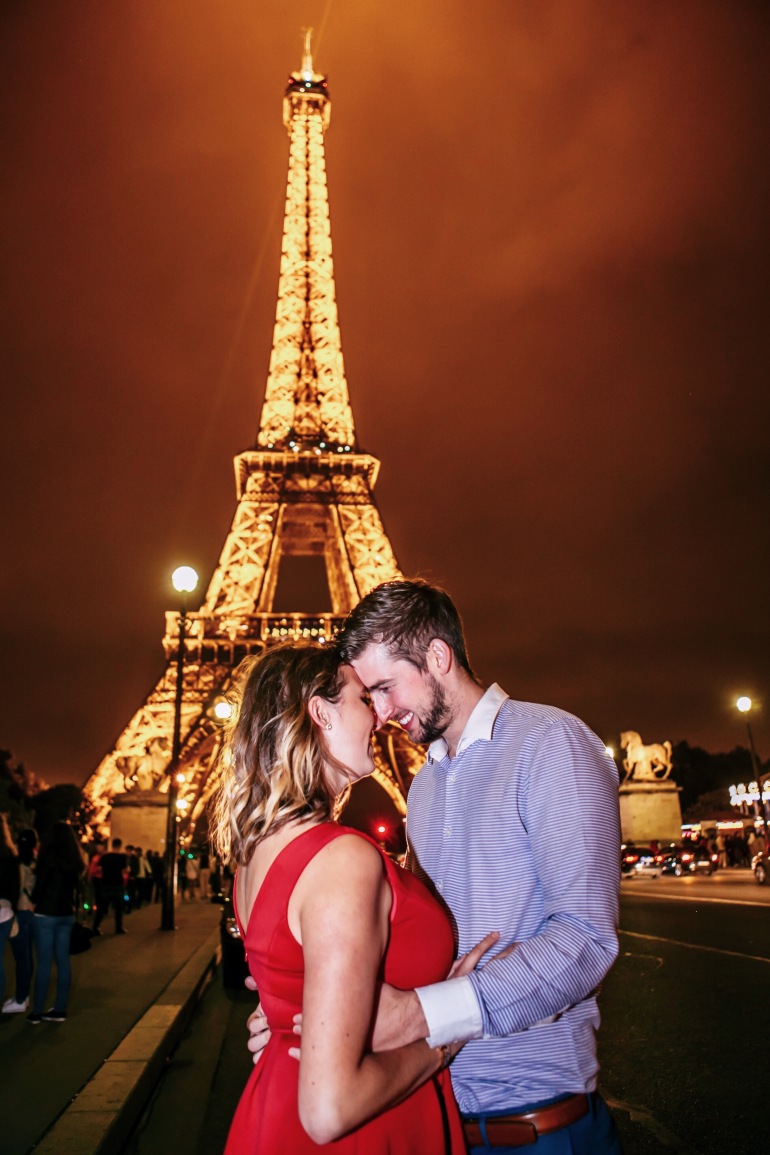 So who did say it first?

E: Ooooh baby, was it ever him! It did get to a certain point where I did realize he was waiting for something. He said he was going to marry me one day yet no one is saying I love you, I was like there’s something happening, and I’m just gonna wait, and I’m gonna ride this out, and he is a romantic…

C: I don’t believe you should just spit [I love you] out because you feel like you should. Elizabeth always talked about Paris, so for her birthday I booked her a surprise trip. I got us a nice Airbnb overlooking the city, we had dinner in the Eiffel tower, we went to wine tastings, and one day we were sitting under a bridge by the Seine, we had bought a bottle of wine from the farmer’s market and that’s when I said it.

E: It was under this little bridge by the river by the Notre Dame and he gave a speech and said I love you.

How did you feel about all of that?

E: A lot of what has happened in our relationship have been things that I just didn’t know were really possible. So that as a present for my birthday—and then all the things he did while we were there and how thoughtful it was—it was just completely a dream come true. It was hard to understand it, because I was like, “Does this happen? And if this happens how am I going to get through this not working out?” But I felt such mutual love and respect with him, that I had never experienced in life, so there was a comfort there too—I knew it was different.

C: All my guy friends made it very clearly I f*cked up. [Laughs] First birthday together? I set the bar far too high!

E: Way too high! I don’t think the bar gets higher!

Growing up how did you perceive love. Was there any person or anything that molded your perception and how it’s changed now?

C: My parents are divorced. It taught me like what red flags to look out for and not to rush into things. Like my parents got engaged and married within a year—they were engaged in four months, six months. But, overall, I didn’t really have any negative feelings around love. I was never like, “Love doesn’t exist.”

E: When I was younger I perceived love, in a relationship, as a risk. I don’t really know why I saw it that way, but I always dreamed it would be the complete fairytale and happy ending—but I just always saw it as a risk, ’cause it could either make you or totally break you, obviously not forever. And I’m a very passion-driven person, so I did see it as a dichotomy as a tragedy or the greatest euphoria ever.

I never wanted anything in the middle. I never wanted the “fine love” or the “okay” or the “comfortable.” I wanted to chase the crazy, big, wild, and passion-driven love, and if it was going to be anything less than that it was gonna be a waste of my time.

Conner you run your own business. Has that put any strain on your relationship?

C: It definitely did in different ways. [The business] is very up and down, we’re doing great now, but it’s very in flux. And the hours can be very demanding. Elizabeth’s been really good there—she’s weathered it. There are some days where I can tell it takes a bigger toll than others. Last Friday, for example, we were supposed to do stuff at night but I ended up working ’til 1 in the morning. That really sucks and I empathize with her there. But I try to make up for it in other ways.

Most people saw your photos from Paris and all these other amazing trips, but is there something that people should realize about relationships outside of what’s shown on social media?

C: A lot of shit that goes on behind the scenes is just the grind of getting the day to day done. And I think that’s really where relationships are made: it’s the stuff in between the highlights that really makes it what it is.

E: We still get so excited just to wake up next to each other. It’s the little, little things, like Saturday mornings having coffee in bed and not going anywhere. We take the time to appreciate going to bed together safe every night and saying “I love you.” It’s finding the real joy in those little day to day things.

Paris isn’t what’s made us have a successful relationship, and in all of the romantic shit this guy has done—and that I feel I’ve done too—those big things are super great, but it’s not really about that. And it shouldn’t be about just that.

Love is…? Fill in the blank with one word or two.

E: Love is an adventure. It’s all encompassing in the fact that love can be unknown: love can be a journey and your destination. You can explore it and experience it differently every day. I think our love evolves—it’s new sometimes but it’s the same old comfort that I’ve known since I knew I loved Conner. It’s dynamic. It’s the core of everything humans do. Love is wild and it’s unknown and it’s also comforting at the same time. How can something even be that? Because it’s an adventure.

*photos provided by Elizabeth and Conner